Derived from opium poppies, heroin is an illegal, highly addictive drug that has been used for centuries.  It is most commonly sold as a white or brownish powder or as a black sticky substance.  Most heroin is “cut” or mixed with starch, powdered milk, quinine or strychnine, although purer heroin is becoming more common.  It is injected, snorted or smoked.  Injection is the most common method because it provides the greatest intensity and most rapid onset of euphoria (7 to 8 seconds). Due to its highly addictive nature, it is crucial for users to seek heroin addiction help and begin the substance abuse recovery process immediately.

The great danger of heroin lies in the way it creates profound degrees of tolerance and physical dependence.  The heroin user’s life soon becomes obsessed with seeking and using the drug.  Physical dependence grows and strong withdrawal symptoms begin a few hours after the drug is taken.  As tolerance for the drug grows, the risk of overdosing increases, placing the user at ever-greater risk.  Through the sharing of needles, heroin users can be exposed to diseases such as hepatitis, HIV/AIDS and other infectious conditions.

The use of heroin has been growing in recent years as it becomes less expensive.  People who are addicted to prescription narcotics such as OxyContin, Vicodin and Percocet may begin using heroin because of its lower cost.  More than 600,000 people were using heroin in 2009, and the number is growing.

Overcoming a heroin addiction is not easy.  The power of the drug creates strong cravings that can occur weeks and months after the initial withdrawal symptoms subside.  Without a strong substance abuse recovery program and a daily commitment to end the addiction, relapse is all too frequent.   The power of heroin and its impact on the brain cannot be minimized.  Please contact our substance abuse recovery center now. 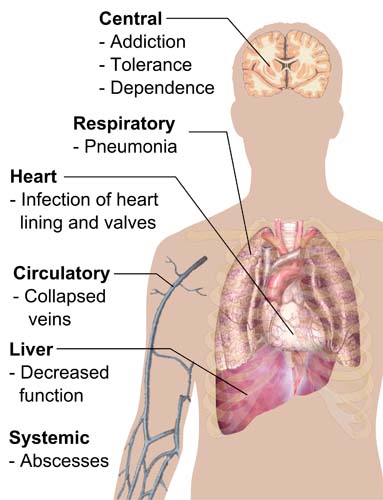 The psychological symptoms of heroin addiction and the “triggers” to use again can last a lifetime.  A strong substance abuse recovery program is essential to prevent relapse.