Motivation is a critical component of effective addiction treatment.  Until people are ready to make significant changes in their life, lasting recovery is not possible.  For this reason, St. Joseph Institute assesses the individual’s readiness to enter treatment and denies admission to those who are not yet ready to begin the work necessary to conquer their addiction.

People go through a series of stages when they change their addictive behavior. The stages are cognitive and behavioral. In the early phases, people tend to focus on thinking about change – whether change is something they need to consider. In later stages, people are actively doing things to change or maintain changes they have already made.

When striving to help a person who has an addiction, it is useful to identify the stage that will define their motivation.

By identifying where a person is in the change cycle, interventions can be tailored to the individual’s “readiness” to progress in the recovery process. Interventions that do not match the person’s readiness are less likely to succeed and more likely to damage rapport, create resistance and impede change. Anything that moves a person through the stages toward a positive outcome should be regarded as a success. 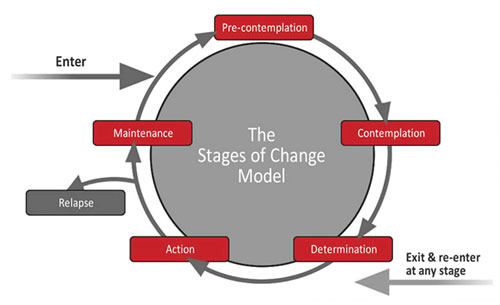 People in the pre-contemplation stage have no intention of changing their behavior for the foreseeable future. They are not thinking about changing their behavior and may not see the behavior as a problem when asked. They certainly do not believe it is problematic. These individuals are often labeled as “resistant” or in “denial.” The reasons for pre-contemplation can fit into the “four R’s”: reluctance, rebellion, resignation and rationalization.

Addiction treatment will not succeed at this stage because the individual has no internal motivation.

The person is aware that a problem exists and seriously considers action but has not yet made a commitment to an action. This is a paradoxical stage of change. The individual is willing to consider the problem and the possibility of change, yet ambivalence can make contemplation a chronic condition. Often the person is quite open to information and yet waiting for the one final piece of information that will compel them to change.

At this stage an intervention, or “tough love” (discontinuing enabling activity), can become the final step necessary to prompt the move toward change.

The person is intent upon taking action soon and often reports some steps in that direction. Thus, this stage is a combination of behavioral actions and intentions. This is a transitory stage that is characterized by the individual’s making a firm commitment to the change process.

Despite making a decision to alter behavior, change is not automatic. Ambivalence, though diminishing, is still present. The decision-making process is still occurring, and pros and cons are still being weighed.

When the addicted person reaches this stage, it is time to provide strong support and encouragement to get them to enter into treatment while the motivation is strong.

The person is aware a problem exists and actively modifies their behavior, experiences and environment in order to overcome the problem. Commitment is clear, and a great deal of effort is expended towards making changes.

Action involves a sustained effort at making changes. This period usually lasts from one to six months. The individual has made a plan and begun implementing it. Ambivalence and commitment are still issues. Too often people do not go back and re-evaluate their change plan. Where is it working? Where is it not? Has there been any planning for handling little slips?

In treating addiction it is important to realize that the action stage should last for many months. An intensive rehab experience is not by itself enough.  Many of the most important actions come after someone has returned home.

The person has made a sustained change wherein a new pattern of behavior has replaced the old. Behavior is firmly established, and threat of relapse becomes less intense.

Maintenance is often viewed as an afterthought where very little activity occurs. However, maintenance is not a static stage. Relapse is possible and occurs for a variety of reasons. Most relapses are not automatic but occur after an initial slip has occurred. During these times the individual’s confidence is weakened and fear is high.  If there is no correction, a full relapse will often be the result.

The on-going program of managing addiction is critical to recovery.  This is a chronic disease that requires a lifetime of care to avoid relapse and a return to addictive behaviors.