Painkiller abuse & the corresponding rise in prescription drug rehab is being described as a national epidemic.  Each year several million more people are using prescription medications that have addictive properties, and ever greater numbers are becoming addicted.  Overdose from painkiller abuse has now become the number #1 cause of injury-related deaths among people aged 35-54.

The most commonly abused prescription drugs come from three classes:

Many people do not realize the danger of prescription drugs because they are prescribed by a doctor and are therefore thought to be safe.  However, a high risk of addiction exists, and changes in brain function can easily occur.  Addiction to prescription drugs is second only to alcohol in reasons why people seek help at our Pennsylvania drug rehab. 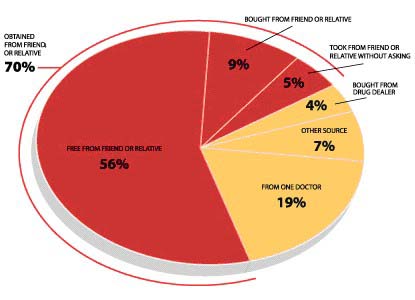 The national epidemic of painkiller abuse is being enabled by families and friends who do not always appreciate the dangers of drugs such as Oxycontin, Percocet, Vicodin and Methadone.  More than 15 million Americans have used prescription medications inappropriately. The fastest growing segment of addiction treatment are those seeking prescription drug rehab.