A Look at Pennsylvania’s Opioid Epidemic

A Look at Pennsylvania’s Opioid Epidemic 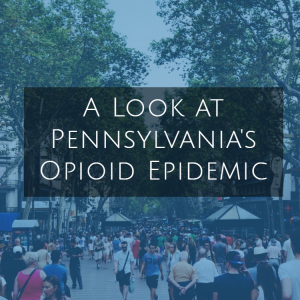 The Roots of a National Crisis
The term opioid is used to refer to substances that act on the opioid receptors in the brain to create morphine-like effects. The opioid epidemic refers to the abuse of prescription pain medications as well as illegal street drugs like heroin. Often, people begin their addiction with prescription pain medication and progress to illegal street drugs when it becomes too difficult to obtain their pills by doctor shopping or borrowing from friends and family members.

Prescription opioids play a vital role in managing chronic pain for people who suffer from serious medical conditions, but have a high potential for abuse when they are not taken precisely as prescribed. Many experts believe the opioid epidemic began in the late 1990s and early 2000s when doctors began shifting away from encouraging physical therapy, biofeedback, and exercise or meditation as the first response for pain management to writing prescriptions for opioids. Often, the patients who received these prescriptions were not fully aware of the risk for dependency and addiction until it was too late.

Opioid Addiction in Pennsylvania
To get a sense of the scale of the problem Pennsylvania is facing, consider the following statistics from 2016:

What’s Been Done to Fight the Epidemic
Governor Tom Wolf has made fighting the opioid epidemic a top priority of his administration. In the 2016 to 2017 state budget, he secured an overall total of $20.4 million to fight opioid abuse. These funds allowed DHS to create 45 Opioid Use Disorder Centers of Excellence to provide care for approximately 10,100 people who are currently unable to access treatment through other means.

Expanded efforts have been made to provide access to naloxone, a medication designed to quickly reduce the effects of opioid overdose, for law enforcement, first responders, schools, and others who are likely to encounter overdose victims. Training for administering this vital medication is provided regularly at several locations throughout the state as well as in a convenient online course.

To reduce the availability of prescription medications for potential misuse, the Department of Drug and Alcohol Programs, in partnership with the Pennsylvania Commission on Crime and Delinquency, the Office of the Attorney General, the National Guard, and the Pennsylvania District Attorneys Association, has implemented a prescription drug take-back box program with 580 take-back boxes across all 67 counties. In 2016, participation in the program allowed for the destruction of approximately 124,336 pounds of no longer needed prescription drugs.

How St. Joseph Institute Is Helping
As the leading treatment and detox center in Pennsylvania, St. Joseph Institute is committed to providing Pennsylvania residents with the care they need to overcome opioid addiction. Our personalized treatment programs focus on healing the mind, body, and spirit–offering counseling, opportunities for spiritual development, and a chance to address co-occurring conditions like anxiety and depression as you prepare to take the first step towards a brighter future.